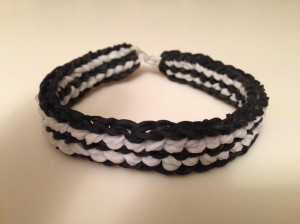 Last night, there was an almighty battle between two arch rival teams in the game of AFL. Collingwood vs Carlton. Always packs out the ground, (except for last night because the game was at the odd time of 7.10 and it was raining and bitterly cold!), as they are two of the biggest teams in the AFL. As with most teams, their fans are fanatical, and bitter enemies until the end. (Except for my little girl who at the age of three went along to such a game wearing a Collingwood jumper, as we barrack for Collingwood, but waving a Carlton flag, as her cousins barrack for Carlton!) Last night’s game was a hell raiser, in our house anyway, as my husband and son screamed and yelled at the TV as free kicks were won and lost, (always lost unfairly), and goals were kicked and unfair umpire calls were retaliated against.

Well, come three quarter time, my husband, who turns into some crazy football freak as soon as the siren blows, got out of his chair in a huff. He went over to the kitchen bench and grabbed his loom bracelet our daughter had made him (see picture above). It sports the black and white Collingwood colours, what else! He proudly wrapped it around his wrist and declared, “Now we have the power!”. What! When it comes to his team, this super intelligent, level headed engineer becomes a proud one eyed supporter, who has no room for rationality and believes that his input of positive thinking will help his team magically get up and win the game!

Well, guess what? We won! It was a close one towards the end, but thanks to my husband and the power of the loom bracelet, we walked away with the four points, and a sense of pride that fills the heart of every Collingwood supporter across the land.

So, to all you Carlton fans, please accept my commiserations, not only did the best team win on the night, but there was a lesson to be learnt in the midst of all this craziness. We learnt that with the power of positive thinking and a casual loom bracelet, we can change the world, or at the very least who wins a football game!

1 Comment on The loom bracelet that saved the game… 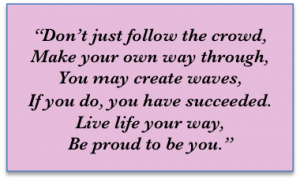